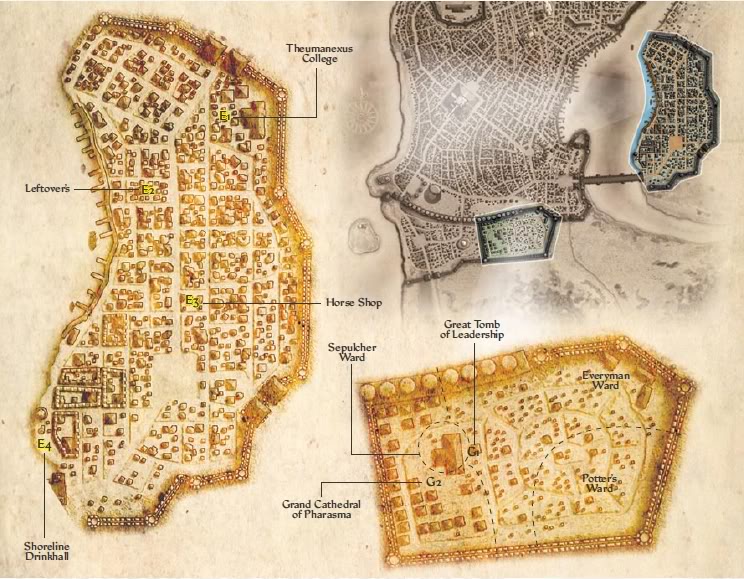 The only district beyond the channel of the Jeggare River, East Shore is home to a handful of noble houses closely tied to the military of the city, as well as the struggling Theumanexus College. East Shore has no wards to subdivide it.

E1. Theumanexus College: The campus for this small wizard school occupies the grounds of the former manor of House Galdur, a supporter of House Viamio during the Cousins' War. When the war concluded, the emperor stripped House Galdur of its noble title and declared all lands of the family forfeit, including this estate. After changing hands a dozen times, the retired wizard adventurer and newly hired Acadamae teacher Yaris Verso purchased the manor in 4603. Shortly after the rise of House Thrune in Cheliax and the Acadamae's infernal shift soon thereafter, Verso donated his Korvosan home to a few idealistic colleagues and left the city.

Where the Acadamae only teaches specialists, Theumanexus offers a generalist approach to wizardry. Although specialists do occasionally graduate from Theumanexus, mostly because they could not pass the Acadamae's strict entrance exam, the apprentices of the college all learn at least the basics of every school and every kind of wizardly implement. Students and faculty of the Acadamae somewhat justifiably look down on those of Theumanexus, who in turn do their best to ignore the taunts and cruel pranks of their more famous competitors. The campus contains three buildings.

E1a. Geezlebottle Hall: Verso's closest wizard friend and the only founding member of the school who remains alive donated the funds to build this impractically designed building. During construction of the building, someone finally pointed out to Tepest Geezlebottle that most students would not, in fact, be gnomes, and thus building a structure sized for humans might prove more valuable. Thus, half of this bizarre building contains rooms and dimensions comfortable for humans, while the other half holds three f loors sized perfectly for gnomes and half lings. Most of these smaller rooms go unused.

E1c. Verso Hall: This magnificent manor house is built in the Old White style of Imperial Cheliax popular a century ago, giving it a gentrified and classic look. Whitewashed trellises along three walls cover much of the building in century-old climbing roses. The building serves as the school's nerve center and contains a few administrative offices and a half-dozen classrooms.

E2. Leftover's: East Shore's only inn contains 12 twoperson rooms in addition to its large, cozy common room. It charges standard rates and offers standard amenities for an inn. The one-armed innkeeper, retired soldier Portenus Gaskelinni, happily tells the story of how a Shoanti berserker relieved him of his appendage just before he returned the favor and separated the Shoanti from his head. Two Oathday nights a month, Gaskelinni's Korvosan Guard buddies stop in and reenact the skirmish (with blunt, wooden swords) for amused audiences.

E3. Horse Shop: As its name implies, this establishment sells horses, as well as ponies, mules, donkeys, the occasional dromedary, and other pack and riding animals. The Horse Shop has the fairest prices in town, often selling at nearly a tenth lower than anywhere else.

E4. Shoreline Drinkhall: This most popular of the few taverns in East Shore does steady business every hour of every day. Three times per day, off-duty garrison guards stop in for a drink before heading home or back to the barracks. Longshoremen stop by in the evenings to carouse with friends and grouse about their back-breaking work. Warehouse managers, dock bosses, Korvosan Guard officers, and even the occasional younger son of an East Shore noble family all stop by the drinkhall throughout the day. Owned, operated, and occasionally patrolled by House Endrin, Shoreline Drinkhall has a reputation for fair prices and stiff drinks, although its meal offerings taste more like military rations than tavern food. Since East Shore is so close to Thief Camp it often fills with Shoanti and Varisians, who seem to instinctively know how to find the drinkhall. Bar brawls occur regularly within the tavern, although not quite with the frequency or danger of bar fights in the Sticky Mermaid.

Back to City Districts.